Demi will be out tomorrow on http://www.extasybooks.com/Demi/

I know I didn’t do snippets for this one, but real life got in the way, what with Christmas shopping, the kid being home from school for a few days, and the fact that I’m packing because I’ll be moving to Rome in a few weeks. Buuuut, I’m posting an excerpt and the cover. 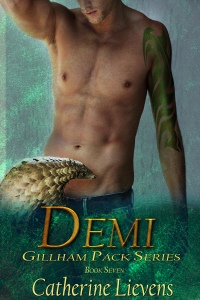 He knocked on Kameron’s office door, but no one answered. “Where is he? Anyone know?”

“He said he would be in his office,” Reed answered.

The door swung open, revealing a flustered Zach. He was wearing his T-shirt inside out and had an obvious hickey on his neck. Noah smirked at him. “Oh, I see why Kameron wasn’t answering.”

Zach slapped his chest. “Shut up.” He looked at Demi, then at Reed, and his eyes widened, probably at seeing Reed in the demons’ company. “You need Kameron?”

“This better be good,” Kameron growled from somewhere behind Zach, making Zach blush.

Noah snickered. “Do you want us to come back later? We were just going to tell you about Reed meeting his mate, and—”

Kameron’s head appeared at the door. “Wait. Reed met his mate? I left him in the kitchen with his mother, how did he manage that?” He looked past Noah and noticed Demi standing close to the wall, looking like he wanted to melt in the wood or run far away. “Oh, I see.”

“Yeah, yeah. Come in, all three of you. Although I’m not sure what you’re doing here,” he said, pointing at Noah.

There was an awkward moment when they had to decide who would sit where since there were only two chairs in front of Kameron’s desk. Zach was already settled in his mate’s lap and watched with an amused expression on his face. “You know, one of you could go get an extra chair from the closet.”

Noah hopped on the desk and settled on the edge of it. “Nah, we’re fine.”