Book 22 in the Whitedell Pride Series, André, will be out tomorrow. You might want to reread Ani before you get to this one, because that’s where Nicky makes his first appearance 🙂

You can still preorder André on the Extasy Books website. If you do, you’ll be able to download it a few hours early!  http://www.extasybooks.com/André/

Sometimes we punish ourselves more heavily than anyone else could.

André is used to shifters. He considers Dominic Nash, the Whitedell pride alpha, like an older brother, and loves spending time with the pride. He’s not looking for a mate, even though he hopes he has one somewhere.

Nicky was abandoned by his pride when he lost the challenge for Dominic’s council seat the year before. He refused Dominic’s offer to stay with the pride and become a member, and instead fled to the human world, where he works in a bar. The last thing he expects is for his mate to be the pretty man who walks into the bar and gets drunk.

When André isn’t able to go back to the mansion on his own, Nicky decides to drive him there. He doesn’t know how the pride will greet him, and once André is safe, he flees. André is his mate, though, and he feels drawn to the mansion. He needs to keep André safe, and if that means making the pride’s battles his own, Nicky will do it eagerly, even if it means going against human hunters when they attack. 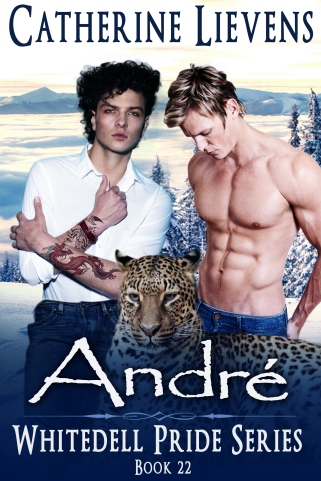 “Can you all shut up? I’m trying to watch a movie,” Nysys grumbled.

André looked at him. “Really? And here I thought you were trying to suck Morin’s tonsils out.”

Nysys scowled. “I wasn’t. He doesn’t have them anymore, so I can’t suck them out.”

“You seemed to enjoy trying, though.”

“You don’t need to hear them to do that.”

“Shut up and make out with your mate.”

André snorted, but he did stop talking to Nysys. He could still talk to Nicky without disturbing Nysys too much, though. “See?” he said, leaning closer to Nicky. “I told you no one cared.”

“No one holds anything against you.” André hoped seeing Delevan and the others welcome him so openly would help Nicky get over his guilt and his self-hatred. André understood where it came from, and he knew it would take more than a dinner for Nicky to let it go, but Nicky couldn’t continue spending his life like a hermit.

“I’m beginning to believe that.”

“Jeesh, guys,” Nysys said. “Get a grip, will you? You’re starting to sound mushy.”

André wasn’t sure whether he was talking to him and Nicky or to the guys on TV, but before he could ask, Nicky leaned forward and asked, “Around your neck?”

He paused, his eyes widening as he realized what he’d said. Nysys blinked at him, then started laughing, and Nicky relaxed next to André.

“You’re funny,” Nysys said. “I wouldn’t have thought, but you are. Nice one.”

Morin leaned close to Nysys. “Weren’t you the one who wanted to watch the movie and told them to shut up?”

“That’s because you had your dick in my—”

Morin slapped a hand on Nysys’ mouth and smiled at André and Nicky. “Sorry. I’ll make sure he stops talking from now on.” He moved his hand away and Nysys opened his mouth, but before he could say anything, Morin kissed him. Nysys moaned, and André inched close to Nicky, because damn if that didn’t give him ideas.

“Do you think they’ll go farther than kissing?” he asked in a whisper.