Bundle (first 3 books at a discount!)

In a world where shifters are confined to areas humans have chosen for them, the Allegheny forest is home for many different kinds–bears, badgers, coyotes… It’s not easy for them to live together, which is why they created a council that makes laws and operates to keep the peace–or at least, that’s what it’s supposed to do. There are still rivalries, though, especially when it comes to how the carriers, a special kind of male shifter who can get pregnant, are treated.

Shifters have nowhere to go, and abuse is rampant in several of the groups that live in the forest. Something needs to be done, and the first step to make it happen is to tilt the council majority the right way. Only then will everyone in the forest be protected.
It’s easier said than done, though. 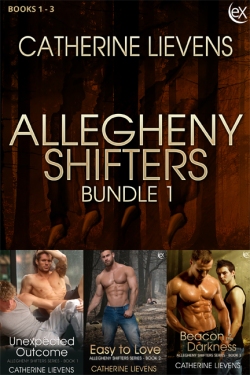 In a world where shifters are relegated to only a few areas of the country, life isn’t easy for everyone.

Levi is a badger shifter, an alpha’s son, and a carrier. The fact that he can get pregnant is a secret, and his family risks a lot by keeping it. He needs to find a husband and get married as soon as he can if he doesn’t want the council to take him and make that decision for him. He agrees to meet Dimitri Marson, the son of the bear alpha. Dimitri is the best candidate for Levi’s cete, but when Levi meets him, he realizes he’s not for him.

Dimitri doesn’t understand why Levi pushes him away. They might not be in love, but they both know getting married is what’s best for the sleuth and the cete, and for Levi. Besides, Dimitri is handsome and rich, something anyone would want. Right?

When his mother points out how much of an idiot he’s been, Dimitri tries to make amends. Levi gives him a second chance, but their union might end before it even starts. Someone is trying to kill Dimitri, and they’re not stopping for anything.

Will Dimitri manage to save himself? And if he does, will Levi really give him another chance to show him they really can work well together? 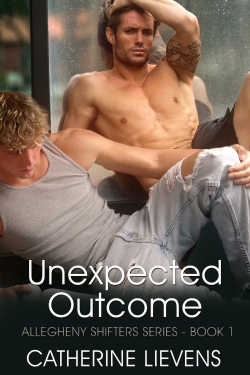 Joel has known he would have to make a choice since he was a teenager—marriage or putting himself in the hands of the council that rules the shifters who live in the Allegheny forest. He’s running out of time, his twenty-fifth birthday is only weeks away, and he has to find someone to marry before then. His choice almost naturally falls on Eddie, the best friend of the man his brother married the year before.

Eddie has had his eye on Joel for months, ever since he first met him. He never expected Joel to choose him as a husband, not when he could have anyone he wants. Eddie hasn’t planned for an arranged marriage to take over his life, but once he realizes Joel has chosen him, he doesn’t hesitate to propose.

Joel and Eddie rush into a marriage neither of them wanted. Will it be enough to keep the council away? Will they be able to make it work and be happy even though love isn’t what brought them together?

3.Beacon in the Darkness

Sometimes you have to let yourself be happy even in the darkest of times.

Seamus has been living with the Steele family since they rescued him from his uncle’s basement. He’s in love with Alex, but he’s sure Alex only sees him as a third brother. Besides, even if he didn’t, he’s the heir to the cete’s leadership, and Seamus can’t imagine he’d want him by his side once he becomes alpha.

Alex’s world was easy, or at least relatively easy, until the council that governs the shifters in the Allegheny forest passed a new law—all the carriers, no matter their age, have to be handed over to them. Alex’s father makes the decision of renovating the Bishop house, a house deep in cete territory, where the carriers will be safe. The first to move there is of course Seamus, the man Alex loves.

More needs to be done, though. While everyone is working on finding dirt on the council members, on keeping the carriers free and safe, and on finding the two teenage carriers who’ve been taken, Alex and Seamus try working out their relationship. Things aren’t easy, though. Seamus won’t be safe until the council is on their side again, and no one knows when that will happen.

But Alex will make sure it does, even if he has to kill for that to happen. 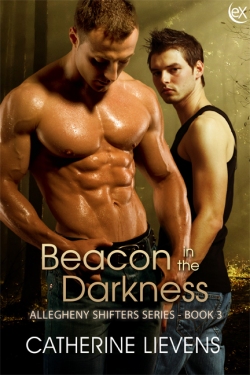 4.Family of the Heart

Bonds born of love are stronger than those born of blood.

Philip’s life is in limbo. He can’t leave the house where he was taken when he was rescued from Oscar, the man who raped him until he got pregnant with a boy. He isn’t sure he wants to anyway. He and Myron are safe there, and for the first time in his life, he has friends, people who care for him. He even has a crush on Abel, one of the council members, but he knows nothing can come of it. Abel has his life in hand. He has an important job and no reason to be interested in Philip, not with the kind of baggage Philip comes with.

Abel has had a crush on Philip since the first time he saw him. He hasn’t told him anything, because he knows it’s not the right moment. Philip’s son is only a few months old, and neither of them can leave the Bishop house. Abel can’t help but hover close, though, helping with Myron when Philip needs him to—and falling deeper in love with him as the days pass.

The council is still torn in half, even now that Oscar is dead. The man who is going to choose his replacement, Alpha Grimes, is the same man who handed Philip off to Oscar, and that means nothing good can come out of his decision. But when Alpha Grimes dies, everything becomes possible again.

Good things happen when you let love in—no matter how terrified you are.

Kari is a loner. He’s lived alone with his father for his entire life, and he wants that to change because his dad deserves better. That’s why he’s taken it upon himself to get rid of the evil men in the Allegheny forest, and he’s finally managed to convince the council to put him on the team that will help the carriers obtain their freedom.

Calder has been fascinated with Kari ever since Kari confessed he was the one who caused the death of Oscar, one of the council members who were abusing carriers. Kari is slippery and has kept his distance, so Calder is surprised but eager when Kari plainly tells him he wants him in his bed.

Kari hasn’t told Calder he’s a carrier. He doesn’t plan to, at least until the condom breaks and he ends up pregnant. But Kari doesn’t want people to know he’s a carrier, because too often carriers are protected, not sent out to save people from their abusers.

Will Kari have to choose between building a family with Calder and continuing the work he’s been doing for the past months? Or is there a way for him to have both?

6.In Spite of Everything

Can two carriers be together?

Julian didn’t expect to have a second chance at life. Then his son dragged him out of the forest, and he met Kaspar.

Kaspar thought he’d eventually go home now that the carriers in the forest are free, but Julian walked into his life and made him rethink everything.

That’s only one of their problems. Kaspar is much younger than Julian, who already has an adult son. Julian doesn’t know how to live with people after spending the past twenty-five years in the forest.

And the humans are coming, something that could cause more problems than anything they are prepared for. 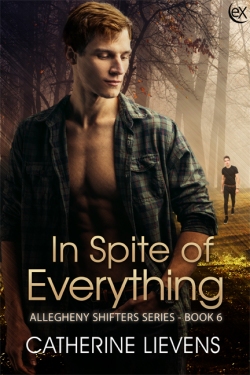 7.The Only Right Choice

How is Chris supposed to choose between his family and the man he loves?

Chris has always known he would become the next alpha. It’s his duty, and there’s no getting out of it.

Jacob and Chris fell in love during the time Chris spent hiding in cete territory. They couldn’t find a way to make things work long term because neither of them was ready to compromise.

Chris is starting to realize he can’t live for his father. He has choices to make, and for once, he wants to think only of himself. Jacob never stopped loving him, and together, they can build a life that will make both of them happy.

When tragedy strikes, it tears Chris and Jacob apart for a second time. Will they make the right choice and find their way back to each other—forever this time? Or will they allow circumstances to make them miserable?