The last thing Dorran expected when he moved out of his old apartment was to find a dead body in the new one. John Mitchell was a despicable man, from what Dorran learns, but no one deserves to have their head bashed in. Dorran supposed he should be grateful for what happened, if anything because one of the detectives on the case is his ex-boyfriend—the one he dumped ten years ago because he didn’t want to come out of the closet.

Things are never easy for Dorran, though, and he has to deal with nosy neighbors, his angry ex, and…a ghost? He really didn’t mean to stick his nose in the investigation, but it’s not his fault everyone seems to prefer talking to him instead of the cops, even when he really would rather not listen. And it’s also not his fault that the dead guy seems to have killed his uncle—and that the uncle still haunts the apartment. If only his ex could understand that. Dorran wants a second chance with Eli, but Eli seems to think Dorran is sticking his nose into things on purpose.

Will Dorran manage to convince Eli he didn’t mean to get involved? Will he find out who killed John Mitchell before that person decides to take out someone else? He knows he should, because with his luck, that next person is going to be him.

Sharing an apartment with a ghost isn’t the greatest thing happening in Dorran’s life…or the worst.

Dorran is finally getting over finding a dead body, getting shot, and having to share his apartment with a ghost. So of course, things start going wonky. Dorran and Eli’s relationship hits a rough patch when Eli refused to let Dorran see his apartment, Francis the ghost is getting cheekier and stronger, and even worse, Dorran’s brother is arrested for killing his pregnant girlfriend. Dorran has no intention of sticking his nose into the investigation—except that’s exactly what he ends up doing.

The sheriff in charge of the investigation has already pegged Chris as guilty, and he’s not going to look any further, so it’s not Dorran’s fault if he has to do the man’s job for him, right? With a recalcitrant Eli and some help from Francis, Dorran starts looking for the real murderer. What’s the sheriff hiding? And what on earth is happening with Francis suddenly being visible?

Chris’ life is in danger, and Dorran isn’t going to let his brother pay for a crime he didn’t commit.

Dorran’s life could be better.

He likes his job as a freelance translator, and he loves his boyfriend, but he and Eli have been fighting, and he’s not sure how to solve their problems. There’s nothing Dorran can do about seeing ghosts, no matter how much Eli hates it, and the situation with Eli’s family isn’t helping matters. Dorran wants to give Eli time to deal with his parents, but he also doesn’t want to be kept a secret.

Dorran temporarily forgets all about his problems when his neighbor, Emanuel, wakes him up at one in the morning and thrusts a bloody knife in his hands. Emanuel insists he didn’t kill his boyfriend. Dorran believes him, but everything points to him. Dorran isn’t sure he’ll be able to prove Emanuel had nothing to do with the murder, not even with the help of Francis, the ghost who shares his apartment. He’s going to try—there’s no way he’d letting an innocent man go to jail when he might be able to help, even though that might be the last drop that ends his relationship with Eli. 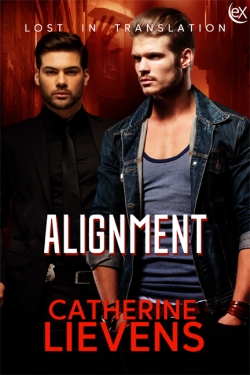 What happens when a dead man isn’t really dead?

Dorran’s father is supposed to be dead.

Dorran is finally settling in—things with Eli’s parents are going well, even though Eli’s mom is still uncomfortable with their relationship, and Eli seems to be more accepting of Dorran’s ability to see ghosts and Francis’ presence in their life.

Then Dorran opens his door to find his father, Angus, on the other side.

Dorran grew up thinking his father was dead. That’s what his mother told him, and Dorran never doubted her. He clearly should have, though, and now he’s confused and unsure whether or not he wants a relationship with his father.

But when Angus is arrested for the murder of his mother-in-law, Dorran can’t abandon him. Angus might have done exactly that when Dorran was three, but that’s not the kind of man Dorran is.

This time, no one died…yet.

Dorran is done with investigating murders. He always ends up wounded, and it’s not good for his health. But when Eli’s brother approaches him and asks him to look into the stalker who’s harassing his girlfriend, Dorran can’t say no. He’s still trying to get Eli’s family to like him, and this is the perfect way, even though he’s wary.

There are several suspects, but none of them fit the idea Dorran has of stalkers. Is he missing something? Is the stalker closer than he thought? Or has he gotten everything wrong? This time, there are no ghosts to interrogate, and Dorran is on his own.